It's August! TIME TO START THINKING ABOUT FALL AND THE VIRTUAL CAREER FAIR - WEDNESDAY, SEPTEMBER 28 th, 3:30 PM - 6:00 PM On HANDSHAKE 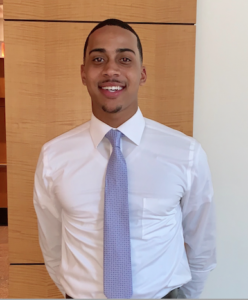 At Washington College Austin was a member of the Men’s Basketball team, Student-Athlete Advisory Committee, Black Student Union and Brown Advisory Board.

Why is networking so important and what advice do you have for current students?

“The importance of networking and networking the right way is so vital for young professionals, as well as for individuals that are deep into their careers. Like many college students who are beginning that stage where they are looking for entry level jobs and internships, networking is so important because it isn’t necessarily what you know, but more so who you know. There are so many different opportunities out there for us to go grab, we just have to know how to network and really want to go get it. When networking with other individuals, this could be exchanging business cards, or really just talking and sharing information. For me, networking has been everything. From Washington College setting up the college career fair events, to me even going out and networking with people on my own. I learned that if you really want to get somewhere in your career or in life, you have to speak up and not be afraid to absorb information from others. Another important thing I learned from networking that I believe some students misunderstand is that when networking, you might not always be talking to the person who is going to give you job. I think that some students believe that you are talking to the person who will give you the job on the spot. Networking is all about communicating to others who might know someone in the field you hope to be in one day, or talking with a friend that can help you through the doors that eventually takes your career off. It’s always that first step that through the door that gets you on your way.”

Located at the Rebecca Corbin Loree Center in the heart of campus, the Center for Career Development is between Goldstein and Bunting halls.
300 Washington Ave
Chestertown, MD 21620